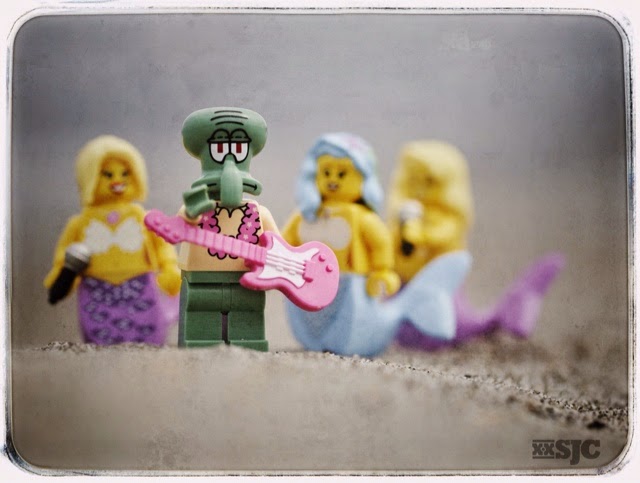 Reality vs the suspension of disbelief is a very strange phenomena in the Lego universe. It's seemingly arbitrary rules continue to amaze me.

Yesterday I posted this photo and the talented +Gordon Webb commented "Great shot Shelly. The pink strat is upside down, unless the squid is a lefty, and plays like Hendrix. :)"

We are willing to accept a guitar playing squid and singing mermaids but not the guitar in a non standard position. The last time I looked, the definition of a guitar is a six or 12 string instrument, not three. What kind of instrument is this really? Does it matter? Is that kind of attention to detail necessary?

There is a trend within the Lego community for an AFOL (or TFOL) to create a signature figure that represents themselves. I myself have a fairly distinct red headed figure I have used for well over a year that is my Lego alter ego. (She even has her own Lego alter ego.) This figure looks nothing like me...nothing. I was talking to a woman the other day who I have know for a few months. She met me first through Instagram. She told me that on our first in person meeting she was very disappointed to find out I looked nothing like my mini figure; where was my pink hair!?!

People take great pride in recreating famous land marks, album covers, particular cars and just about anything else you can think of in the human world with their Lego. In fact many of Lego's most iconic sets are based on something in the human world: The VW Bug, The Taj Mahal, The London Bridge, The  Lego UniMog ...the list goes on and on.

But where is the fun in that? How come we can't make cars that grow flowers or crazy houses that twist and turn, bridges that don't conform to logic or create a mini figure that looks like who we want to be? Why can we suspend our disbelief about a talking squid and some mermaids but not with an upside down guitar? For all I know Squidward taught Jimmi Hendrix everything he knew about guitar playing. Because in MY Lego world anything is possible.

If you have a Lego mini figure representing you, does it look like you?
When you create with Lego do you work from photographs or from your imagination?

PS - I hope you will check out Gordon's work on G+ or on Instagram. He creates wonderful, fabulous, unique mech's - each a thing of beauty that has no basis in reality.
Posted by Unknown at 11:48 AM